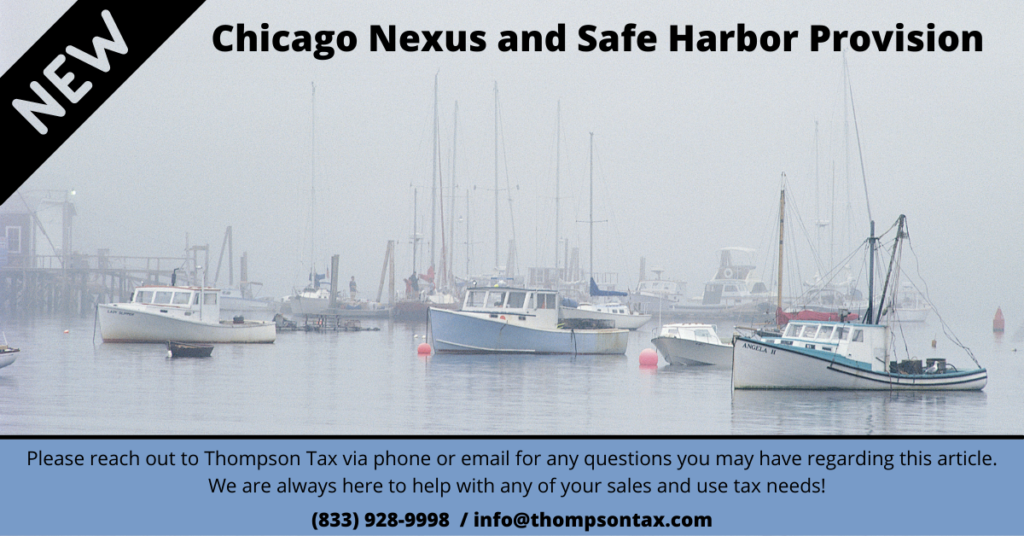 The City of Chicago’s economic nexus threshold, includes a Safe Harbor provision for small businesses. The Safe Harbor Provision, as it relates to the economic threshold, protects entities from creating nexus provided that they have no significant contacts within the City such as:

If an out-of-state entity has no contact with Chicago other than sales, which when combined over the last four quarters have not exceeded the City’s economic nexus threshold of at least $100,000 in sales or more than 200 sales transactions, it is protected by the Safe Harbor provision and will not be expected to collect Chicago’s Home Rule personal property lease transaction tax (as applied to nonpossessory computer leases) or the Chicago amusement tax (as applied to amusements that are delivered electronically) e.g. online gaming and streaming.

Effective July 1, 2021, Safe Harbor rules will be applied on a prospective basis. No refunds or credits will be granted for taxes paid or remitted before that date. Please note: The Safe Harbor Provision does not affect the issue of whether a customer must pay taxes, only whether an entity has the duty to collect.

If an out-of-state entity qualified in the past, but no longer qualifies under Safe Harbor provision, it must: